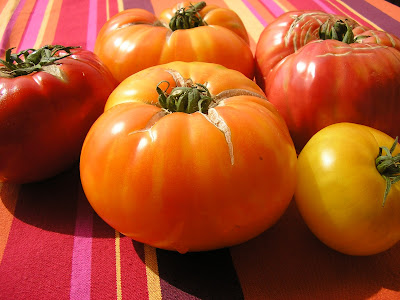 Before living in France I never really thought much about what I was eating or food in general, beyond “What am I going to have for dinner?”, which was along the same lines as the airline question “Pasta or chicken?”.

However, this is a nation where food is important.  I mean, really important, number-one-topic-of-conversation important.  This is a country where people can be at the table, eating, and be discussing what they ate last night, what they’ll be eating tonight, what they ate at their mum’s this weekend, etc, etc…  Returning from holidays, a destination is judged on how well one ate there.

I have to confess that this has now rubbed off on me and I too am prone to rambling on about things that I’ve eaten or produce that I have bought.  This is particularly well illustrated by the Quest for Good Tomatoes.
In a previous life, a tomato was generally found lurking on my plate in either slice or wedge format.  Fire engine red on the outside, but often pale pink on the inside with pips and juice that tended to disappear once cut into.  I never really liked tomatoes much and tended to push them to the edge of any “salad” (slice of cucumber, leaf of iceberg lettuce, cress) that they appeared in.

Now however, summer is punctuated by the Quest for Good Tomatoes.  A frequent subject for bemoaning the State of Things in the French side of the family is that it is now impossible to find Good Tomatoes.  But our quest is over, for we have found them.

All summer long we’ve been eating tomato salads made up of these beauties.  Juicy, colourful, sweet, it’s like eating sunshine.  They have reconciled me with tomatoes and reminded me that they are after all a fruit.
Putting on my jumper this morning I realized that summer drawing to an end.  But I can safely say that I have never eaten as many (good) tomatoes in my life.

Email ThisBlogThis!Share to TwitterShare to FacebookShare to Pinterest
Labels: 12 - 24 months, In France