Christmas in Scotland has been and gone, and so have the Christmas cards.  But French people have until 31st January to wish everyone they know all the best for the New Year.
I've always tried to make sure our Christmas cards for people in the UK were in the post before Christmas (the 24th December still counts as "before Christmas", doesn't it?), but the message for the French contingent wishes them joyeuses fêtes, so it's OK if they get theirs after Christmas...(not that I'm trying to justify my lack of organisation, obviously...). 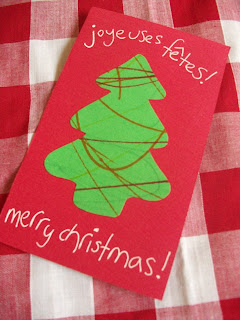 I've always made my Christmas cards.  And I have now delegated this to Puce, or tried to involve her as much as possible until she gets bored and wanders off.  We become more adventurous as she gets older, but this has been one of my favourite cards to date, the first year that she "contributed".  She was 2 years old and had just started "expressing herself artistically" (scribbling) on paper.  Lots of paper, lots of scribbles.  I'm a bit of a hoarder and couldn't bear throwing this artwork away, so this was the perfect answer: re-use the scribbles.  Use a biscuit cutter to make a simple Christmas tree template on card, then cut-out from the scribbles (they weren't all a seasonal green, most plain old white, but that works too).

It's then much easier on the conscience to throw away all the left-over "artworks"...