The significance of Saturday mornings changes over time.  It used to be synonymous with lie-ins, hanging about in my pyjamas, doing a lot of not very much.  Later on, it became a precious day-off, again celebrated with a lie-in perhaps followed by a lazy coffee on the terrasse of a café... 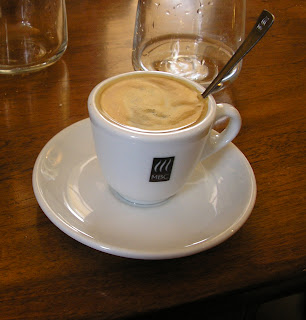 The arrival of a small person in the house catapults the idea of a Saturday morning into orbit.  Lie-ins become a thing of the past (unless you count being woken at 6am as a lie-in).  It never made much difference as Monsieur R worked on Saturdays, so the alarm would go off at 6.30 anyway...if we made it that far.

Now, a few years down the line, our Saturday morning are again different.  Puce goes to La Petite Ecole Française in Edinburgh, the Saturday school for children who are being brought up bilingual.  We were keen to keep her links with French as an active language, not just something Papa speaks at home and this is a great help.  Any fears that she might not appreciate another day at school have been unfounded and she happily waves us out of the classroom as her friends arrive, chattering to each other in French.

We amble down the corridor, greeting the other parents as they arrive.  On the way out, we pass by the German families, whose classes are on a different floor - Scots accents, German words and French greetings swirl all around and Edinburgh suddenly seems like it's the heart of Europe.  When we return to collect Puce, clutching coloriages, bits of new songs and shouts of au revoir to her friends, the Spanish contingent are arriving to pick up their little ones.

It's an amazing feeling to be in the midst of this language melting pot.  To be surrounded by all these children who flit between worlds of words and ideas in a way that we find harder and harder to do as adults, especially if like me, we've been raised with only one language and culture.  As adults we can move to another country, adopt it and immerse ourselves in the language, but it's hard to shake off the comparison element, we don't do it like that where I come from.

One day, I saw a little girl, obviously late for the German school, stopping to watch big drops of rain landing with huge splashes in a puddle.  "Drip, drip, drip" she chanted, absent-mindedly as she watched.  Her father hurried on, calling her to get a move on.  "Drip, drip, drip", she carried on watching her puddle.  The father spun round, suddenly attentive and called in German what I understood to mean "yes, yes, drip, drip, drip", but with the German onomatopoeia.  I don't speak a word of German, but I understand the minority language parent, anxious to make sure that his word for rain dripping gets fixed in his child's head, no matter how late it might make them or whatever else is going on around.

Language in action, language in context; and like the steady drip, drip of Scottish rain, eventually the words stick.