Monsieur R and I have such different childhood memories when it comes to anything to do with food.  When Puce started eating food (as opposed to painting with it), I began to realise we'd not only grown up in different countries, but it might as well have been different planets.  One day, I overheard Monsieur R in the kitchen, Puce in her high chair watching him going round the kitchen enthusing about the haricots verts délicieux that his grandmother used to prepare for him and how he could eat the whole plateful, and how he'd prepared them for her and they were going to be a régal!  I don't recall ever feeling that way about green beans, or any other vegetable for that matter; I would push them around the plate, somehow hoping that they might go away or I might just be "let off" eating them. Fat chance.

Further to this exchange, I saw Puce tentatively take a green bean, and as Monsieur R led the way with a bean of his own, she began to nibble the edge.  She then asked for another, and another.  Result!  I gave her green beans the next day, when Monsieur R had gone back to work.  Looking like I must have at her age, she eyed the bean suspiciously and then gave me that look that I knew meant it wasn't going to happen.  I had provided the food, but I hadn't provided the hype.

I've written about this before, but attitude to food in France is different from the UK.  I can't begin to describe how stupendously, far-reachingly and brilliantly different.  But it begins early.  And a lot of it is down to the way it's presented.  Monsieur R showed as much by his hyping up of the green beans.  He did the same for me the first time he took me to eat oysters at a little bar on the boulevard in our quartier.  Oysters?  Non merci would have been my reply, had I been given a chance to reply.  Actually, there wasn't even a question as I recall, it was presented as a fait accompli.  The short walk to the bar was filled with Monsieur R's descriptions of why oysters in this particular season were not to be missed, that it wasn't just about the oysters, it was the petit verre de blanc that goes with it, the pain de seigle, the salty butter, the atmosphere, the  chance to sit and watch the world go by, feeling the goodness of the sea reinforcing your natural defences against the winter chills and aches and pains.  He sold it to me.  Actually eating the oysters was just a formality. 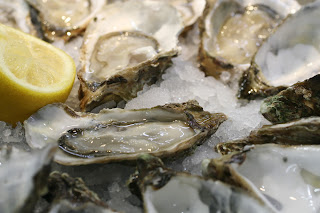 Photo by Tony
There's a similar thing going on at the market: the stalls are so enticingly laid out, looking at all this greenery I feel the way I used to in sweet shops, I want to buy everything.  Advice would be freely given by the stallholder as to the best way to prepare vegetables, les enfants adorent ça!  The promise that my child would love this vegetable cooked in any way would be enough for me to buy it.  A cherry tomato, an abricot or cherry would be offered for Puce, who would wolf it down and ask for more.  Same thing again on the cheese stand, ensuring Puce's brand loyalty for comté cheese from an early age. 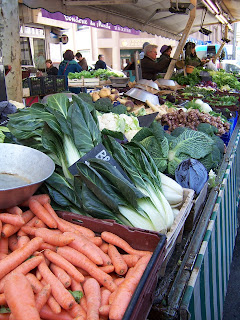 This is what I find so fascinating about having a child who's growing up with the influence of another culture; I get an insider view as to how that culture functions.  As Puce grows, I begin to understand things that I could never have comprehended by simply speaking French.  Seeing first hand how food memories are shared and passed on, creating a binding thread between the generations helps me to understand better the French national obsession with food.  And to wonder what we have in its place...