Our week in France was a good opportunity for a refresher course in French family cooking.  Over the years, I have picked up some great insider tips sitting at the kitchen tables of my mother-in-law and Monsieur R's grandmothers, the kind of thing you won't learn from cook books and you probably wouldn't get to eat in a restaurant: honest-to-goodness, hearty old-fashioned home cooking.

Within a couple of days, I was struck by the quantity of vegetables we had eaten, or more accurately, by the quantity of vegetables Puce had eaten.  Radishes, pumpkin, chicory, beetroot, to name but a few.  “Winter” salads of lambs lettuce or frisee, the versatile peas-carrots-potatoes mix, eaten cold with mayonnaise as a macedoine, or hot with lardons as a jardiniere.

Knowing what to do with veg is only part of it.  France has kept a proximity with its raw ingredients, particulary fruit and vegetables, that we in the UK have lost.  The daily marché is not a just-for-the-tourists show, but a way of keeping a link between what's on your plate and where it's come from.  The stalls make you want to buy vegetables.  They are laid out as beautifully as any shop window in the grande rue and the array of colours and varieties are as enticing as the nearby patisseries. 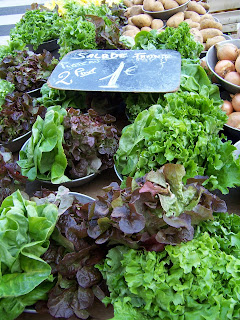 Being able to buy from the person who has grown the food is a luxury; you can ask about where it's from, how it was grown, how to cook it and how much you'll need.  If you’re out of inspiration, the producteur will be able to give you ideas on how to prepare things – he’s not only a purveyor but a consumer of what he’s selling. 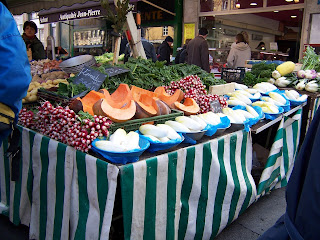 The first time I brought Monsieur R to Scotland, I lost him in a supermarket.  I found him in the vegetable section, staring at the vacucum-packed turnips.  Why, he asked, is each turnip individually wrapped in plastic?  I’d never noticed before.  But sure enough, taking a step back, every item was in a bag.  A tangible physical barrier between the raw ingredients and the consumer, perhaps making it more hygenic, but also a lot less appealing.

We’re at a disadvantage here. Scotland doesn’t have much of a food culture and there’s a disconnect between the media interest for food and what is readily available to buy; if healthy, enjoyable eating is to become a reality for more people, the fruit and veg to do it need to be available and affordable.  Scotland won’t be able to compete with French market stalls in the summer months, but there are plenty of vegetables that could be enjoyed at this time of year:  winter lettuce varieties, pumpkins, spinach, chicory, radishes (usually sold in France with their leaves, which can then in turn be made into a deliciously simple soup). 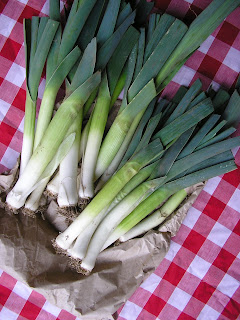 Monsieur R however, is not perturbed by this lack of raw materials.  Quite the opposite in fact, he hunts down farms and local producers and surprises all of us by finding sources we never knew existed.  He came home with a small field’s worth of leeks the other day and proceeded to make poireaux en salade - washed leeks are steamed until tender, allowed to cool then served with a vinaigrette.   Not only is it unexpectedly delicious, but it represents what I love about real French family food.  You won't find this on the menu of a tourist restaurant, but if you're lucky enough to be invited into a French home you will taste a simple ingredient turned into something extraordinary, si simple, mais si bon.

Email ThisBlogThis!Share to TwitterShare to FacebookShare to Pinterest
Labels: 4 years, Food, In Scotland