The first time I sat in a French kitchen I thought people were drinking their coffee from bowls because the cups were all in the washing-up.  Over time I began to realise that this is how it works, you drink your morning chocolat chaud or café from a bol, not a cup or a mug.  It's one of those tiny differences that could almost go un-noticed, but form part of a bigger ritual that places France a world away from the UK.  The differences start with the first meal of the day, le petit déj. 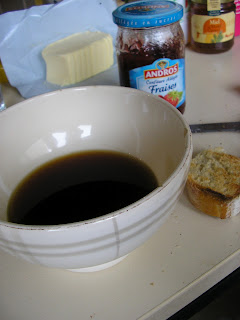 This may be the land of croissants and pain au chocolat, but these butter-laden luxuries tend to be kept for the weekend.  Everyday breakfast will likely as not be tartines (bread or toast) or biscottes (which I am not allowed to call pre-toasted toast - although that's what it looks like).  The verb tartiner means to spread, and it may be just with butter, or topped with jam or honey.  I smile as I catch myself dipping my buttered tartine into my coffee, something that used to horrify me but now seems natural.

In line with the general approach to food in France, coffee is never, ever instant.  I've clocked a filter coffee machine in every home or gite I've been in, usually looking well-used and in need of a wash.  Hot chocolate is usually Nesquik.

And where are the breakfast cereals in all this?  A stroll down the aisles of a French supermarket reveals the crucial breakfast difference: the cereal aisle in France is about the same length as the British yoghurt aisle - ie, not very.  Whereas in Britain we have every type of cereal you can think of, in every size of box, the French aisle has done its best to import some cereals but it doesn't quite hang right.  This may well change in time, but in the meantime, I'm glad it's not all Frosties and Coco Pops, I think packs of 100 slices of pre-toasted toast is much more fun to look at.

Email ThisBlogThis!Share to TwitterShare to FacebookShare to Pinterest
Labels: 4 years, Food, In France