Now we’re living in Scotland, French is the minority language.  Monsieur R continues to share his language and culture with Puce in the same way as he did while we lived in Lyon – la cuisine.

Monsieur R likes to be in the kitchen “preparing” something; I often wonder whether he takes it as a personal challenge to use every single utensil in the kitchen, even if he’s just re-heating soup…grumble grumble from the head dishwasher.

No matter how much time I spend in proximity to French people in their kitchens, or eating food they have made, I can’t get any closer to copying how they do it.  It took me a long time to figure out that what I thought was reluctance to share recipes is actually their approach to cooking: la cuisine au pif.

La cuisine au pif is what I call "guestimating".  You start with a recipe, then you adapt and develop depending on what’s in season, what you have to hand and what needs using up (les restes).  It relies on two factors: the knowledge of certain cookery rules and the confidence to leave the beaten path of the recipe world.

When it comes to cookery rules, the French Delia Smith is Françoise Bernard.  The ancient, stained and battered version of her Les Recettes Faciles is Monsieur R’s reference point if he ever needs to check anything kitchen-wise.  Few photo’s, the pages are laid out in a no-nonsense manner with indications as to the frugality of the meal, remarks from the author and tips for anyone trying the recipe (always written in the feminine…which probably wouldn’t get past the political correctness test today, but it makes me smile). 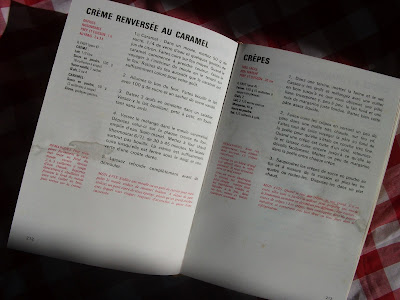 As to the confidence required to cook au pif, that can only come by being around people who cook and take pleasure in “preparing”, tasting and eating what they make.  Puce has always sat with her papa on a Sunday after the market and made a “soupe” with the discarded potato peelings, parsley stalks and carrot tops, while he “prepares” the meal.  She has gradually become more involved in making the vinaigrettes that accompany salads, naming the ingredients and counting in the number of spoonfuls.  We’re now lucky enough to have a little patch of ground for growing, so she is in charge of collecting the bouquet garni, parsley, rosemary, thyme, bay leaves.

Goûte-moi ça is an expression I have heard many times over various dinner tables; it can sometimes sound almost like a challenge, rather than just “taste this”.  Whereas it is actually an invitation to partake and to enjoy.  I share my language through activities: making and doing. By the same token, Puce’s involvement in the kitchen and at the table will make French cuisine and language something integral in her life, as it is in the lives of her French family, to be shared and celebrated - whatever the language we’re talking.