The bike-cycle of a spider


The other evening, in the quiet semi-darkness long after Puce had gone to bed, I trod on a raisin.  Odd, I thought, as Puce (the person in charge of sprinkling raisins on the carpet), hasn't had any raisins for ages.  So I picked it up to get a closer look.  As the legs crunched between my fingers, and with it dangling at 10cm from my nose, I realised I was peering at a spider - a very big, hairy, spider.  I distanced myself rapidly - across the room, pinned against the opposing wall in one agile movement - and managed to communicate to Monsieur R that I thought I'd just picked up a spider, would he be so kind as to go and check?  The actual sentence I used didn't contain as many complete words as that, but he got the general idea.  He went for a closer look and confirmed it was, and that it was a biggy.  And very dead.  French people in general, and Monsieur R being no exception (until he lived here and had to deal with them), never believe the size of the spiders we have roaming around in Scotland, but believe me, they're huge.


We decided to keep the lifeless spider in the Bug Viewer for Puce to see the next day.  She took it to nursery.  In the afternoon, we decided that it would be respectful to let it go and follow its "bike-cycle" (they're doing caterpillar-to-butterfly "bike-cycles" at nursery - "lifecycles" in grown-up speak).  For a split second I imagined digging a (big) hole and putting the dead spider in it, before I realised that it would most likely have become bird food, had I unknowingly trod on it outside.  Puce thought it would be good to help the birds along a bit by signposting the free food. 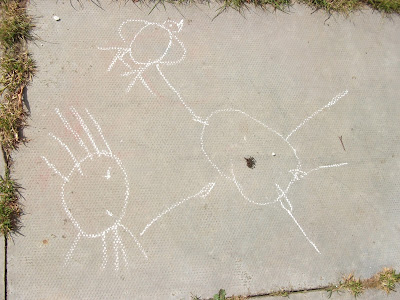 I think the birds were also a bit concerned at the size of the spider, as we didn't have any immediate takers.  But after we'd all forgotten about it, we realised it had gone.

Email ThisBlogThis!Share to TwitterShare to FacebookShare to Pinterest
Labels: 5 years, In Scotland